Birthday and dinner at the Himalayan Char Grill

Happy birthday to me and to With Bite!  It's unbelievable to consider that I started With Bite 6 years ago!  What a journey it's been.  Since blogging about my culinary adventures in Halifax, I've had some incredible food - and life - experiences, and I'd like to thank everyone who has followed (and lived)  these adventures with me since then.


This past wknd marked my 30th birthday.  Holy cannoli!  I feel so old, but yet so young at the same time. Thankfully, I have some incredible friends here in Oz and my birthday (week) was so incredible that I'll remember if for years to come.

My best pal Maria - whom I met at Uni in Halifax - lives in Brisbane and made my (life) weekend, by travelling to Sydney to spend my birthday with me.  Maria is one of those friendships that are lifelong - we don't talk all that often, but she's always there when you need her and, no matter how much time has passed, we pick up where we left off.

Anyway, Maria arrived in Sydney on Friday, picked me up from work, and we got to the first night's celebrations in the backyard with a bottle of S. C. Pannell's Pronto; a blend of Sauvingnon Blanc, Riesling and Pinot Grigio.  I had ordered a great bunch of wines from work for my bday festivities and this was among the best.  It's funny since M sent me a msg. upon arrival that she was looking forward to a good glass of wine and I had already put 6 btls. of white in the fridge to chill.  Priorities, ppl!

The really amazing part to the wknd though, was that my friend Christine had told me the Wednesday prior that she was throwing a BBQ for me in my own backyard and that I didn't have to do a thing.  I didn't really believe her, but I should have.  At about 7 pm on Friday, she - and my friends - arrived with sausages, pasta salad, baguette and a brownie bday cake for me!  Oh, and sparklers. :) 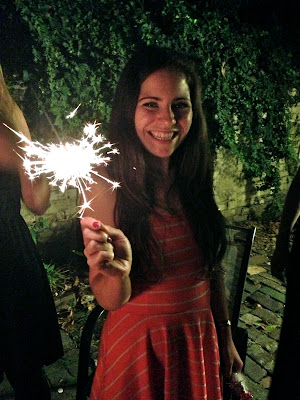 Me, blowing out the candles on my
M&M-studded brownie 'cake' 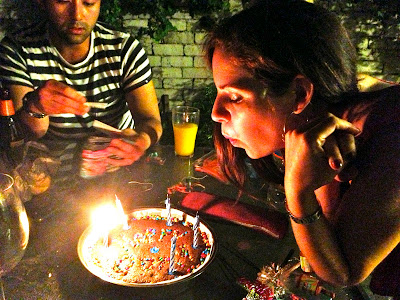 It was an awesome night.  One that ended up in me having a bit too late of a night and I leaving a bit too late to make my much-anticipated birthday hot air balloon ride.  Yup, they left without us.  And so, in an effort to drown my (liver) sorrows at having missed the ride, we got MacDonald's breakfast.  Don't judge.


But it gets better! Upon leaving Macca's with our bfast, I just so happened to look up at the sky and see... our balloon headed to the heavens. After M snapped this shot, we did erupt into peals of laughter at the irony of it all. We even ended up having our Macca's in a park over-looking the departure site. Sidenote: can I just say that Macca's bfast is delicious?  Seriously - how often do I have fast food?  Never, that's how often.  It's nice to indulge every now and again.


See that speck in the sky?
That's the balloon I shoulda been on had I had my act together! 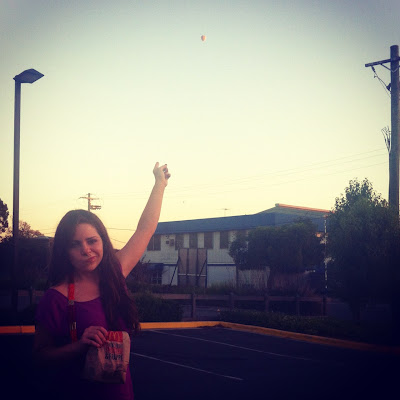 And so, we drowned our sorrows at Coogie Beach... 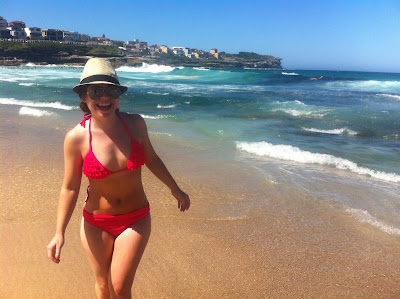 Later, we met my pals at the Himalayan Char Grill for dinner.  But, not before some pre-dinner drinks in the backyard - a btl of bubbly as an aperitif. And so, we floated off to the resto on a cloud of bubbles. 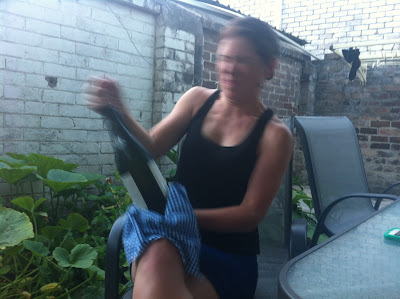 When we arrived, I opened up the real treat: a btl of Jacquinot Champagne NV for my bday festivities.  This is an awesome drink - much less commercial than Moet or Veuve and way better on the palate. 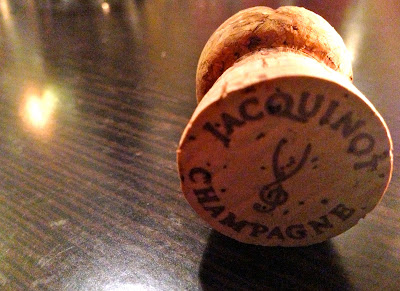 I was happy to influence the whole group on their selections. My housemate had ordered takeaway in the past and I raved about the beef cheeks and the scallops which I had tried of theirs.  M and I shared two dishes: the beef cheeks, obviously, and the samosa.  The samosa was incredible; crispy and luscious, served with a tomato salsa and a creamy yogurt-based tamarind sauce that was juuuust sweet enough. I'd go back just for the sauce.... 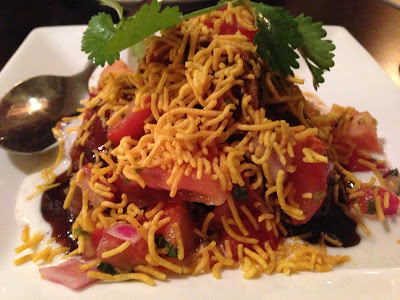 But seriously, the beef was incredible. So, so, succulent and tender, they were well worth the price and the hype.  The sauce was rich and heartwarming, and served with some roti and raita, this dish would have been an indulgent plate for one.
Masala Beef Cheek ($22.90)
Diced Beef  w/ peppers in Himalayan spices 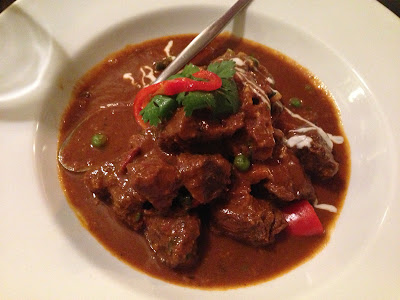 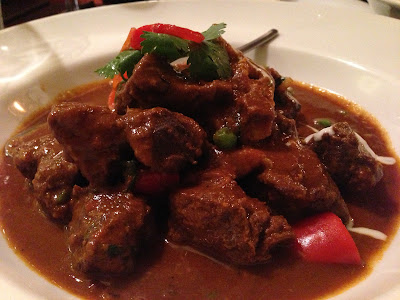 Once dinner was over, we headed up to The Little Guy on GPR for some cocktails - an awesome spot for wknd drinks, or a Sunday arvo session.  This is M and I with ond of my faves - a good, really good, G&T. 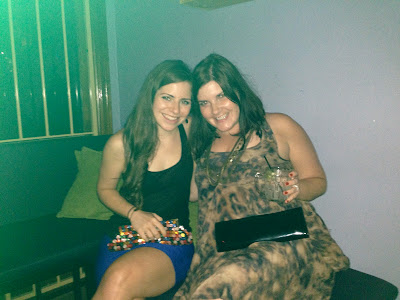